What are Common Period Problems? - Apollo Cradle
Skip to content

What are Common Period Problems? 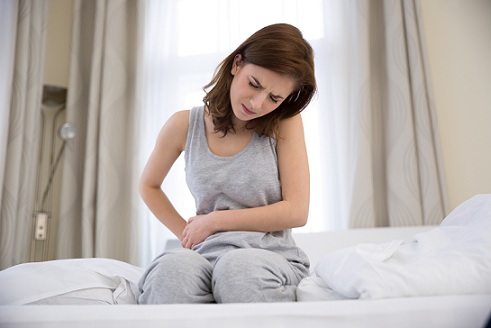 Menstrual cycles are sometimes very painful and problematic for some women. Problems usually show up when a girl first reach puberty.

Premenstrual periods are sometimes accompanied by a number of problems like cramping, fatigue, laziness etc. Such problems are referred to as ‘Premenstrual Syndrome’ (PMS) and go away as soon as period starts. PMS can be the cause of a number of problems like- Bloating, irritability, backache, headache, breast soreness, acne, fatigue, food craving, depression, anxiety, stress, insomnia, constipation or diarrhoea and mild stomach cramp. PMS is uncomfortable but not a matter of concern.

A common menstrual problem is a menorrhagia which is the heavy flow of blood during the menstrual cycle. This is a matter of concern and has to be examined by the doctor as the patient becomes anaemic due to loss of blood. This abnormal cycle often continues for seven days on the average or even longer.
The cause of menorrhagia is the hormonal imbalance of progesterone and estrogens which gives rise to problems like vaginal infection, inflammation of the cervix, underactive thyroid gland, non-cancerous uterus tumour and changes in diet.

Amenorrhea or Absence of Menstrual Cycle

At the first stage of puberty, girls normally miss a period in between and maybe for six months or more. The cause of such absence of menstrual cycle may be some problem in the pituitary gland or some congenital defect of the female reproductive system or delayed puberty. Amenorrhea may be primary or secondary. It is primary when a girl does not acquire puberty at the age of 16 and secondary amenorrhea is when a woman misses her regular periods for six months or more.
Amenorrhea may be the cause of a number of problems like- anorexia, overactive thyroid, ovarian cyst, sudden weight gain and difficulty in conception or pregnancy.
Apart from these problems, there are other problems related to the menstrual cycle which may be caused by the women themselves. Taking contraceptive pills for too long can stop menstrual cycles, premature ovarian failure, pelvic inflammatory disease or even lead to premature menopause.
A missed period may also mean that a woman is pregnant. She can confirm this by pregnancy test done by her doctor.

Dysmenorrhea may be Primary or Secondary

Dysmenorrhea, also known as painful periods, or menstrual cramps, is painduring menstruation. Its usual onset occurs around the time that menstruationbegins. The pain is usually in the pelvis or lower abdomen. Other symptoms may include back pain, diarrhea, or nausea

Secondary dysmenorrhea is when cramps are a result of a medical problem such as endometriosis. Endometriosis is a condition that occurs when tissue similar to the lining of the uterus is found outside its normal location. This usually causes pain before and/or during a young woman’s menstrual period

manpreet kaur
06:27 22 Jan 19
Experince was really good we got neat and clean room and services. Staff was really friendly.

Pallavi Arora
06:22 17 Jan 19
Staff is good and helping but are little late always including doctors ! Had to wait alot for scans

pallav marwaha
11:25 14 Jan 19
Experience with Dr Meenu was very good. Really enjoyed my stay in Apollo. Thanks for all services. Q